Animal Law in Australasia: A New Dialogue looks at the legal relationship between humans and animals in Australia and New Zealand. It asks whether existing laws really do protect animals, and, where the law comes up short, how it could be improved.

Australian, New Zealand and international experts cover topics ranging from core concepts and theoretical questions around “animal welfare” and law, to specific matters of concern: animal cruelty sentencing, live animal export, recreational hunting, and commercial uses of animals in farming and research. The questions explored go beyond animal welfare and challenge the reader to think about the nature of legal interests, and practical and ethical contexts for a range of laws.

“This book is to be applauded given that law books of this nature are not often considered worthy of publication because of the esoteric nature of the subject.”

Animal Law in Australasia: A New Dialogue, was a project conceived by Peter Sankoff, then of the University of Auckland, and Steven White, of Griffith Law School in 2006. The project had two parts: first, a workshop held in September 2007, in Brisbane, Australia; second, publication of the first book on animal law ever written in the Southern Hemisphere in February 2009. A follow up workshop – Animal Law in Australasia: Redux – was organized by Peter Sankoff and Jackson Walkden-Brown and held at Bond University in November 2010.

Animal Law in Australasia: Continuing the Dialogue was published in 2013.

“For the sake of the hundreds of millions of animals that suffer incalculably in Australia and New Zealand each year, hopefully this book will serve as a catalyst for positive change. The book is a heavy and often dispiriting read, but its underlying message is an optimistic one. By drawing upon the best principles of justice and compassion that underlie liberal democracy, Animal Law in Australasia shines a beacon of light for our legislators and judges to follow if they are brave enough to withstand the sheer power of the opposing force.”

Animal Law in Australasia is a comprehensive effort with 17 chapters by 15 contributors. Despite the number of authors there is a consistency of style throughout that is testimony to the efforts of the editors. It is refreshing, then, to see a book such as this – scholarly in approach but accessible in style – refining the quality of discourse and framing, as the subtitle proposes, a new dialogue.

“The book is compelling reading for anyone with a strong interest in animal welfare, but is also a commendable read for students of jurisprudence, and those interested in a broader understanding of the concept of the law and the way in which legal regulation can promote social good.”

“Animal Law In Australasia – A New Dialogue is a scholarly examination of existing legal relationships between humans and animals. It is an indispensable guide into a vast inaccessible reality that exists for animals, which has yet to be challenged by society as a whole. It is destined to become a standard in the literature of Australian and New Zealand animal law. Here is a book that poses vital questions serving to underline how inadequate is the data on which to base answers to legal problems concerning animals and how inadequate is the current data concerning animals and their protection in law.” 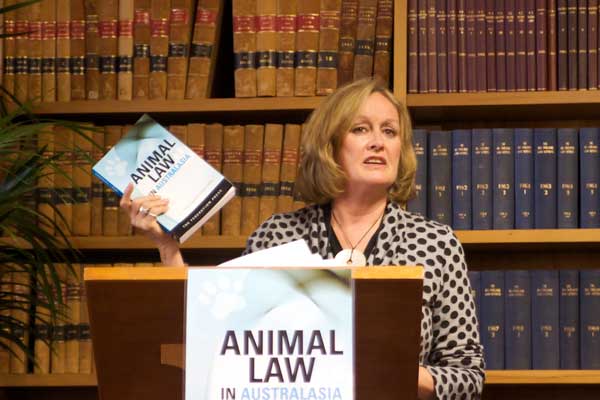